A personal computer or phone while very powerful devices, do have limited uses. Through the installation of third party apps, they can become powerful tools catering to our very own highly specific private use cases. It does however pay to be at least a little wary about what we choose to install. 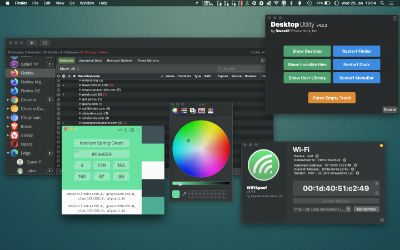 Apps for everything
There are apps for everything. The one thing they have in common; they aim to generate profit. With the exception of apps created for learning purposes or for pure hobby reasons, most apps are trying to generate revenue. Why? because developers have bills to pay, and need to eat, just like the everybody else. There are a number of different strategies app developers like use to generate income for their efforts. The most obvious are the…

This one is super obvious, you pay an upfront cost (or small recurring cost) to gain a license to use an app in an unrestricted state. Usually you have the option to trial the app first, to make sure it fits your workflow before you have to stump up some $$. I like to think this is the most honest way to produce income from an app, and with this model - you would be right in assuming that this is the safest type of app to install on your device. With some income guaranteed, there is little incentive to try to further monetize via other “hidden” methods.

These apps generate value by giving you a certain number of features for free, with the option to upgrade for any specialized features or extra content. These apps should also be a reasonably safe bet, when it comes to data harvesting.

This is where things can potentially get a little risky. As previously mentioned, some devs like to create apps for learning purposes, or as a hobby in their spare time. Other free apps will use an ad supported model for generating income, which is still at least obvious to you what is happening. It is the other kind of app which can potentially cause issues.

Time and time again, we have been caught out by data breaches from online services exposing their customer data. You don’t need to look far, for examples But apps can also be potential “leaks” for your personal information. This could amount to just the data you enter into the app, but is likely to be much more extensive. There is the recent case of the Avast subsidiary Jumpshot, which sold browsing data collected from the Avast antivirus app.

Another prominent data harvesting issue was recently discovered in the Ring doorbell app. The ring app was found to be selling data including customer names, IP addresses and other identifiable information.

Well, thats a tough one… Normally the answer would be to only install apps from reputable companies… But thats no longer the case any more… It’s the wild west out there… Common sense would seem to prevail here however. If something is free with no obvious monetization strategy, you are more than likely paying by sharing your data.

*I should note, that SweetP Productions does not sell (or give away) any information to any third parties. In fact, none of our apps collect any user data. We also don’t use any third party Web Analytics. 🙂

The Pros and Cons of using a Password Manager